Recently I received a question from a ship owner operating a container liner service in Rotterdam, on what regulations are applicable in respect of noise made during port activities. Apparently one of the Masters had reported that authorities were measuring noise levels in the port and this worried the guys in the office. They must have heard how much I enjoy searching through the applicable laws and nowadays the internet is a great tool to use.

After the maritime industry has been confronted with rules on various topics dealing with pollution and environmental issues, new regulations on sound-pollution sound plausible.  Of course the industry will closely monitor developments as they might result in mandatory investments and implementation of additional paperwork and certifications.

The question was simple, how much noise are we allowed to make with our vessel while in the port of Rotterdam?  And of course I hoped to find a concrete answer, such as 100 dB but I found out that things are much more complicated. 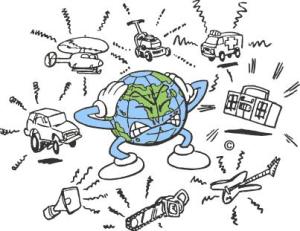 The seaports, and especially the new developed areas are normally located away from residential areas. In the ports you will find industries, warehouses, stevedores, roads, railways and of course the ships. Near the big ports you might even find an airport nearby.  All the activities such as production, loading, discharging, transport etc. produce noise, all kinds of noise.

People living near railway tracks, airports or busy roads are exposed to noises. To what extend they are exposed will vary from location. What is the activity of main noise producers around and what is the distance between these producers and the residential areas.  Perhaps most important, what is considered an acceptable exposure to loud noise and how to define loud noise. How many families does the government consider an acceptable number to be exposed to loud noises.

These is no actual law that limits the amount of noise that factories or other port activities may produce. Especially for new developed port areas, such as ‘Maasvlakte 2’ in Rotterdam, the production of noise and other pollution was taken in consideration during the first steps of development at the drawing table.

Is there no regulation at all that protect the surrounding houses from exposure to noises? Yes there is, as the Dutch national government and local governments have implemented the European Guidelines, Directive 2002/49/EC dated 25 June 2002, relating to the assessment and management of environmental noise.

This binds the authorities to measure, calculate and monitor the noises produced and the effects of this noise to the health and wellbeing of the surrounding neighbours. All data is being processed in charts / maps of the area.  Based on these data, the adjacent area of a port or industrial area is divided into zones, showing the probable nuisance.  A separate detailed map is made to show the nuisance in the day hours between 07:00 and 19:00 hrs, an 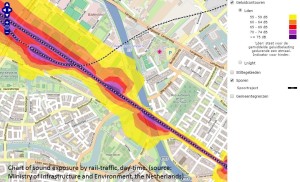 d the nuisance between 19:00 and 07:00 hours.  If the number of residents within a zone is considered to be too large for intense exposure, the authorities will have to take measures to protect them by placing sound-reflecting walls, green areas, dikes or other structures to reduce health risks and complaints.

Does this affect the development of ports?  Yes it does.  In 2004 when the port of Dordrecht tried to attract new business and more or less transform the port area from a conservative industrial area into a logistics oriented port area, the application was rejected based on the increase of noise for the surrounding areas.  The zones would shift and the residents could not be protected from noises beyond the level that is considered acceptable. Apart from health damage, a change of activities might cause devaluation of houses.

The answer to the ship owner was that I could reassure them that they were measuring the effects of new industry at the Maasvlakte and to see if this matched their earlier calculations.  Based on their findings, they can advise authorities to shift the zones or to take measures. I reassured them that they were not at risk of receiving a fine for producing noise customary to the activity.

We would like to present ourselves as ‘the ship agent’, the first guy to walk on the gangway on arrival of a vessel in port, sometimes in the middle of the night, when the linesmen are still busy adding more mooring ropes. The man who meets the disembarking pilot on the stairs. The person to discuss the planning, procedures and port regulations with the tired Captain and preparing all necessary paperwork before the immigration and custom-authorities will arrive.  As the last guy to leave the vessel before her departure after delivering the cargo documents and statement of facts, with the pilot waiting on the bridge and tug boats fastened, steaming and ready to pull the ship from the quay-side.

We would like to see ourselves like that, or we look back with some sort of melancholy, thinking about the old days when the only way to communicate with a vessel was to send a Telex or by visiting the vessel in person.

I Can’t speak for other ports, but in Rotterdam the agent has become the operator who is coordinating the port-call from behind a computer screen. The man who happens to be in possession of an account with the port-authorities and a login-code to enter the central system from where all ship movements are being coordinated.

Theoretically it would be possible to arrange the complete port call sitting in a chair at the other side of the world.

Most agents hardly ever visit any vessel. Some agencies might have a special water clerk or boarding agent, driving around to deliver spare-parts that arrived at the agent’s office prior vessel’s arrival, or they hire someone to do it for them. When a vessel really needs proper assistance, some agents hire an interim project manager to make the necessary arrangements on their / ship-owners behalf.

We are still used to, or it is still compulsory to appoint an agent in a foreign port but how will this be 10 years from now? Will your port agent in Rotterdam be the person sitting behind a computer in India? Who knows…

Is it for an agent nowadays still necessary to visit a vessel, without this being more than a courtesy visit? I believe it is.  More often I hear from ship-chandlers, mechanics or other suppliers to the vessel that they  are receiving requests from the ship’s crew to arrange small or larger supplies or labour which should be in my opinion the task of a good agent with an extensive network. The agents should use their contacts to provide these services in a competitive way, representing the interests of the Owners, even when originally appointed by the Charterers. The identity of the agent is disappearing, his tasks have been decreased by own doing and behaviour and his contact with the ship is decreasing. The vessel does not personally know the agent, how to contact the agent or sees the agent as the company mainly to inform upon arrival, shifting or departure.

Despite all modern technology and means of communication the ship-agent is losing contact with the ship’s Captain and the crew. I’m not saying that a good performance and service lies in a simple personal vi 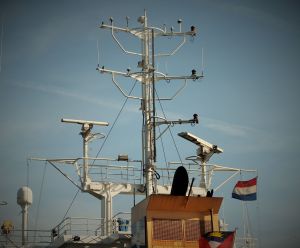 sit to the vessel in port, but I believe that I Master would easier rely on the services of an agent he has actually met.

You might state that a lot of modern ships are only in port for a few hours and a visit would cost the agents valuable hours and that present fees are not covering that. I’m convinced that visiting the ship’s regularly will increase the efforts of the agent to perform and to be a good service provider. Besides, many Captains of today will be the managers and executives in the coming future.  It is a networking opportunity and a chance to be recommended by the captain after a job wel done.